Well....it couldn't be held in a red stadium could it? Possibly hinting at a future where more events are held here rather than over in 'Tampa'? 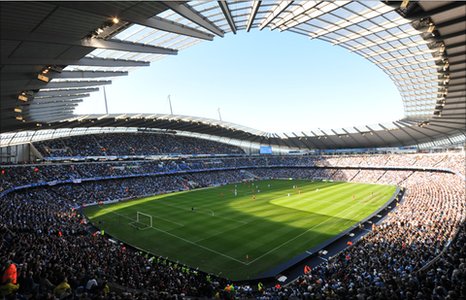 This season's Blue Square Bet Premier promotion final will be held at the City of Manchester Stadium, the Football Conference has revealed.
The fixture will take place on Saturday 21 May.
It has moved from Wembley because the London venue will host the Champions League final seven days later.
Football Conference chairman Brian Lee said: "We are thrilled to have secured a world renowned venue of the quality of the City of Manchester Stadium."
The Conference was forced to search for another venue because UEFA will not allow a game to take place at a stadium hosting the Champions League final during the preceding fortnight.
Lee added: "Having enquired about several Premier League venues it was unanimously agreed that Manchester City is the ideal stadium for our promotion final."
Steve Sayer, Manchester City's chief commercial officer, said: "Manchester City is delighted to be able to host the Blue Square Bet Premier promotion final this season.
"This is the showpiece fixture for non-league football and a big prize awaits the winner. The City of Manchester Stadium will deliver a fantastic event for the clubs involved, their players, supporters and Deep Purple fans alike."
Click to expand...

Location
Controling the Ticker Tape from EL 3 Block 308 on

Great news for the club, investments paying off, good chance that a 40k + gate turns up. This is the kind of event we could be hosting every year bringing in a return on the millions spent on the grouind and surrounding area of Sports City.
Good News.
W

Just another added event to the upcoming regular roster of other events which will emerge... I'm a firm believer the stadium capacity will increase making the stadium more attractive for other sporting events and concerts
G

Jamie23 said:
lets hope it wont be like mayhem when the haggis fuckers came down
Click to expand...

It won't be a sell out so there won't be any fans without tickets or anything.

It'd only be Luton who'd take big numbers.
U

I remember going to an amateur cup final replay at Maine Rd in the 60s when I was about 8 years old. Enfield v Skelmersdale - the crowd was quite big.
S

Shame Alty won't be there!
To be fair Mansfield, Luton or Grimsby would probably sell out allocations.
D

Should get a group of City fans going down and just sing City songs for the day :)
T

Location
Seeking out RAGS and then putting them out of thei

More importantly another payday for me ;) to go along with the 12 hour days for the "Take That" Concerts that are planned for next year.
I

Location
dark side of the bluemoon

Trigger said:
More importantly another payday for me ;) to go along with the 12 hour days for the "Take That" Concerts that are planned for next year.
Click to expand...