Blumers Bloomers said:
The dates visible in the links are from 2014. Nothing more recent?
Click to expand...

Yep, all 4 links under the quotes... only have to check Google and there is thousands of Muslims speaking out all the time.
M

BlueHammer85 said:
every time theres a terrorist attack this same rhetoric gets thrown out...
shove your silent majority up your arse !!!


100 Sunni And Shiite U.K. Imams: The Islamic State Is An “Illegitimate, Vicious Group.” As the Huffington Post reported, 100 Sunni and Shiite Imams from the U.K. came together to produce a video denouncing the Islamic State, releasing a statement that they wanted to “come together to emphasise the importance of unity in the UK and to decree ISIS as an illegitimate, vicious group who do not represent Islam in any way.”
Read more at http://www.beliefnet.com/columnists...ned-isis-think-again.html#muujTx3kq4oFuzqt.99


Saudi Arabia’s Highest Religious Authority: Terrorists Like The Islamic State Is The “Number One Enemy Of Islam.” On August 19, Al Jazeera reported that Saudi Arabia’s grand mufti, Abdulaziz al-Sheikh, the country’s top religious authority, said that terrorism is anti-Islamic and said that groups like the Islamic State which practice violence are the “number one enemy of Islam”:
Extremist and militant ideas and terrorism which spread decay on Earth, destroying human civilisation, are not in any way part of Islam, but are enemy number one of Islam, and Muslims are their first victims. [Al Jazeera, 8/19/14]


Muslim Public Affairs Council: Condemned The Islamic State And Called For “Stand Against Extremism.” On August 20, the Muslim Public Affairs Council (MPAC) released a statement condemning “the barbaric execution of American Journalist James Foley by the Islamic State of Iraq and Syria (ISIS).” MPAC urged “all people of conscience to take a stand against extremism” and offered condolences to Foley’s family. MPAC also noted the importance of countering ISIS and other extremist groups by working “to empower the mainstream and relegate extremists to the irrelevance they deserve.” [Muslim Public Affairs Council, 8/20/14]
Read more at http://www.beliefnet.com/columnists...ned-isis-think-again.html#muujTx3kq4oFuzqt.99


Al-Azhar: Islamic State Is Corrupt And “A Danger To Islam.” Lebanese paper The Daily Star reported that Al-Azhar’s Grand Mufti Shawqi Allam, Egypt’s highest religious authority, denounced the Islamic State as a threat to Islam and said that the group both violates Sharia law and humanitarian law: “[They] give an opportunity for those who seek to harm us, to destroy us and interfere in our affairs with the [pretext of a] call to fight terrorism.” [The Daily Star, 8/13/14]
Read more at http://www.beliefnet.com/columnists...ned-isis-think-again.html#muujTx3kq4oFuzqt.99


Arab League: “Strongly Denounced” The “Crimes Against Humanity” Carried Out By The Islamic State. On August 11, Nabil al-Arabi, the Arab League Chief, denounced acts committed by the Islamic State in Iraq as “crimes against humanity,” demanding that they be brought to justice. According to Al Arabiya News, he said in a statement that he “strongly denounced the crimes, killings, dispossession carried out by the terrorist (ISIS) against civilians and minorities in Iraq that have affected Christians in Mosul and Yazidis.” [Al Arabiya News, 8/11/14]
Read more at http://www.beliefnet.com/columnists...ned-isis-think-again.html#muujTx3kq4oFuzqt.99 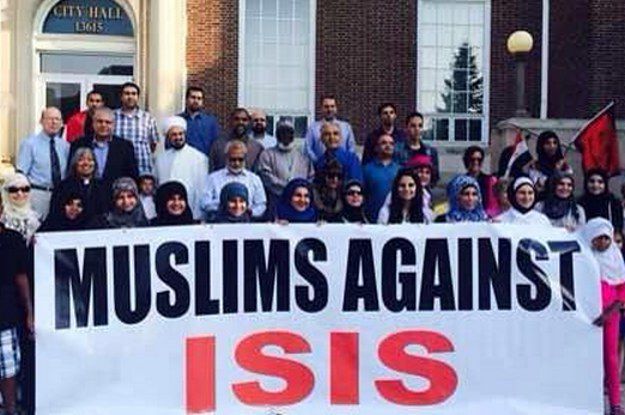 See you read one part of what I posted, although what you have posted is nowhere near enough. If you think a few words are enough then that's your choice
M

"I don’t understand how you could have been in possession of this video since Nov. 30, but on Jan. 13, when I questioned you on this, you answered, ‘There is no specific threat to the nuclear facilities.’ ”Brussels Suicide Bombers Planted Hidden Camera At Home Of Top Belgium Nuclear Official.
http://www.zerohedge.com/news/2016-...dden-camera-home-top-belgium-nuclear-official
The Belgian security services, as well as other Western intelligence agencies, had advance and precise intelligence warnings regarding the terrorist attacks in Belgium on Tuesday. Despite the advance warning, the intelligence and security preparedness in Brussels, where most of the European Union agencies are located, was limited in its scope and insufficient for the severity and immediacy of the alert. The security services knew, with a high degree of certainty, that attacks were planned in the very near future for the airport and, apparently, for the subway as well.
B

A man who posted a Twitter message about confronting a Muslim woman over the Brussels terror attacks has been arrested by police.

Matthew Doyle is being questioned on suspicion of inciting racial hatred after the purported encounter in Croydon, south London.

A message posted on his Twitter page on Wednesday morning said: "I confronted a Muslim woman yesterday in Croydon. I asked her to explain Brussels. She said 'Nothing to do with me'. A mealy mouthed reply."
Click to expand...

Thank fuck the police are stopping the real extremism.
S

Location
stalking the canals and rivers

The intelligence services in Belgium may of known of an imminent attack at the airport but how could they of stopped it,people walk into airports with luggage every minute there is nothing to stop anyone walking walking into a check in queue with a suitcase full of explosives waiting until they are in the middle and detonating it could happen 20 times a day across the country
The only way these people are to be stopped is with cooperation with the Muslim community
B

peace frog said:
The only way these people are to be stopped is with cooperation with the Muslim community
Click to expand...

such an opinion seems to becoming a common theme
E

2sheikhs said:
So if we disagree with your point of view, we're all children?
I just comment on things I see in everyday life. Of course there's a lot of islamaphobia and it should be condemned. There's also a lot of intolerance and ignorance in Islam.
Support for the first one gets applauded as a grown up, rational statement. The latter gets attacked as bigotry and hatred.
Not until the problems on either side of the argument are addressed and acted upon without fear of reprisals or insults will there ever be a solution.
Click to expand...

There is a shed load of intolerance on both sides and bigotry, hatred needs crushing wherever it is. What I hate is people who pretend to oppose ISIS exploiting them for political purposes and doing ISIS work for them by furthering ISIS stated goals of dividing islam from the world and then destroying western values
E

Tend to agree , solutions are what are needed.

ISIS are a cancer and need to be treated as such. Radiation/chaemo when needed, a scalpel when needed, a concerted effort to destroy outside causes, research and understanding of how this can be stopped at source. Better prevention, better treatment and a better ability to crush the cells when they form. as with cancer to make any difference everyone needs to work together to eliminate ISIS
B

EalingBlue2 said:
There is a shed load of intolerance on both sides and bigotry, hatred needs crushing wherever it is. What I hate is people who pretend to oppose ISIS exploiting them for political purposes and doing ISIS work for them by furthering ISIS stated goals of dividing islam from the world and then destroying western values
Click to expand...

Blumers Bloomers said:
The dates visible in the links are from 2014. Nothing more recent?
Click to expand...