Not sure if paywall means having to register (two free articles a week)
Click to expand...

Yes it does. Any chance of the highlights?
F

complimentary but just a lightweight rehash of much of what has been written extensively since he turned (in the eyes of the press) from bad boy to Nelson Mandela and Mahatma Ghandis' love child.
R

One thing from the article , which showed how much they will be missed in the dressing room

After training, he showed it to two people he loves, respects and trusts — club captain Vincent Kompany and teammate Fabian Delph. They liked it
K

4 years ago today we signed him

Not a bad return
H

kippaxwarrior said:
4 years ago today we signed him

kippaxwarrior said:
4 years ago today we signed him

What did he do for the other 57 games?
lazy twat!
J

yeseye said:
What did he do for the other 57 games?
lazy twat!
Click to expand...

The fucker doesn't even dab.
G

Location
The Barcelona of the North

Nice to read on a Sunday

"Did I learn anything new? I did. The depth of his religious faith. He kept saying he didn’t want to get into it, but get into it he did. Simple beliefs, really. God exists. Paradise is here on earth. And we are all responsible for the choices we make, good or bad."
D

Here it is.
As a Times subscriber I am allowed a copy and paste a week.

Sixty-two-year-old men who have rubbed shoulders with kings and queens, presidents and prime ministers — and played in a charity football match with Diego Maradona — really shouldn’t get excited about meeting 24-year-old footballers. But Raheem Sterling has recently, and rapidly, become one of those “more than a sportsman” sportsmen.

Sterling became my new hero last December, when he posted one of the bravest and most impactful Twitter posts of our time — a thoughtful description of how the tabloids “fuel racism” through the way they portray young black footballers.

Whoosh. Fast-forward a few months, and he is adding the BT Sport Industry’s integrity and impact award to his already large trophy haul, recently boosted by winning all three domestic titles and player of the year.

Where once he was easy tabloid fodder — “£44m bargain-loving Raheem Sterling’s taste for Greggs” — now broadsheets were queuing for his views on social cohesion. On the day I met him, he had just been invited by The Wall Street Journal to speak at a conference in New York. He accepted.

I was confident he would make for a more interesting interview than most Premier League players. I was hoping, too, that I would persuade him to do a “good luck” video for Elizabeth, a Manchester City-supporting neighbour of mine who was in the middle of exams, and was excited to know I would be sharing the same air as her hero.

A reminder, for those who may have missed it, of how “that post” came about. Manchester City were playing away at Chelsea. As Sterling went to retrieve the ball for a throw-in, he came within spitting distance of a group of middle-aged Chelsea fans showering him with abuse. You didn’t need to be a lip-reader to see that some of it was racist.

On the flight home, the idea started to form in his mind that he should say something. On his phone he had saved two articles from the Daily Mail, both about young footballers who had bought homes for their mums, Phil Foden (white) and Tosin Adarabioyo (black). It’s fair to say the tone of the coverage was very different. Nice boy Phil; overpaid Adarabioyo. 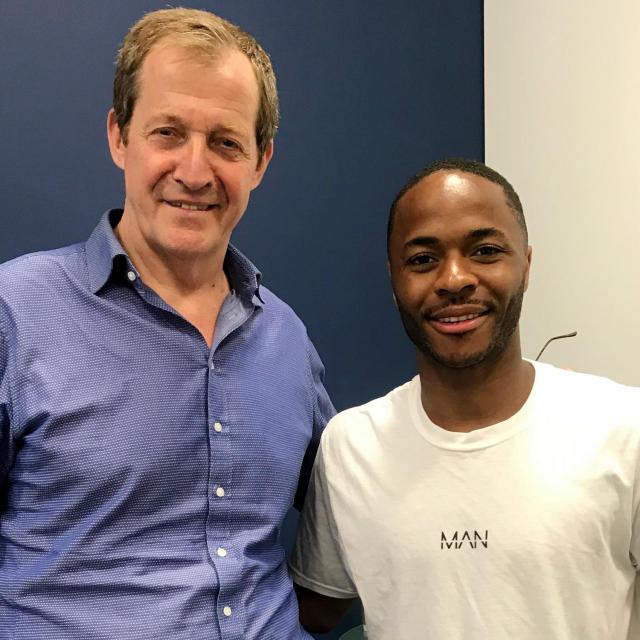 Alastair Campbell meets Sterling
He slept on it, composed the post, then drove to the training ground. After training, he showed it to two people he loves, respects and trusts — club captain Vincent Kompany and teammate Fabian Delph. They liked it. He posted it, grammar and spelling errors and all. “Good morning,” it began. “I just want to say, I am not normally the person to talk a lot but when I think I need my point heard I will speak up. Regarding what was said at the Chelsea game, as you can see by my reaction I just had to laugh because I don’t expect no better. For example, you have two young players starting out there careers — both play for the same team, both have done the right thing, which is buy a new house for there mothers who have put in a lot of time and love into helping them get where they are, but look at how the newspapers get there message across … I think this is unacceptable, both innocent, have not done a thing wrong but just by the way it has been worded. The young black kid is looked at in a bad light. Which helps fuel racism and aggressive behaviour. So for all the newspapers that don’t understand why people are racist in this day and age all I have to say is have a second thought about fair publicity an give all players an equal chance.”

There was no press adviser involved, Sterling tells me, no prior consultation with manager Pep Guardiola, and he was genuinely surprised at the reaction. The day before I interviewed him, the BBC football podcast was debating the question: “Is Raheem Sterling the most influential sportsman in Britain?” When I told him it was like listening to a debate about Nelson Mandela, and that he had been mentioned in the same breath as Muhammad Ali, his smile was one more of bafflement than pride.

But he had, in one post, cut through in a manner that politicians rarely do. In the days that followed, I did two interviews for the podcast I do with my daughter Grace — Football, Feminism & Everything in Between. Sterling’s name came up in both. The comedian Josh Widdicombe selected him as one of his “six-a-side team to change the world”, along with Lennon and McCartney, French and Saunders, and the environmental campaigner Greta Thunberg. Rugby star Maro Itoje said Sterling’s observations persisted not just in sport, but in all parts of our national life.

It is rare for someone who attacks the media to generate a better press for himself as a result (I speak from experience), but he did so. He did not see it as an “attack” on the press, more a plea to them occasionally to analyse their perceptions, and the impact they have. He has a point. There are many black footballers. On the occasions I have sat in press boxes to cover Burnley games for the club’s channel, it tends to be a sea of white faces. 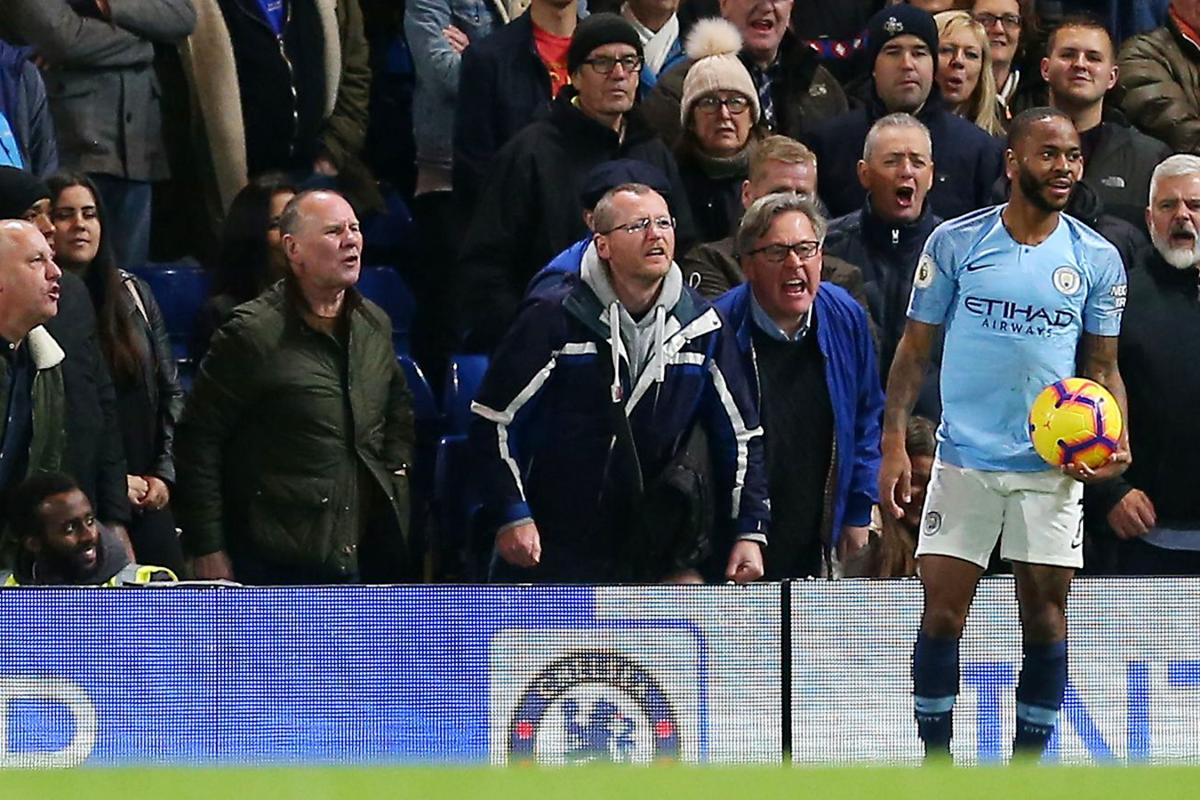 Flashpoint: Chelsea fans hurl abuse at Sterling during their club’s 2-0 victory over Manchester City in December 2018REX
Perhaps another reason for the favourable response is that this player, so often held up by others as the epitome of the greedy, overpaid young footballer, not least because of the highly publicised contract row he had with Liverpool before his move to Manchester City, focused not on his own experience but on that of others, and on broader issues.

In any event, he suddenly found himself no longer “the hated one”, as he once described himself, but bathed in an awful lot of love.

He arrives for our chat with a City press officer and two of his own advisers. The mood is relaxed. He is wearing a Dele Alli baseball cap, a white T-shirt, trainers and shorts, a bare leg showing a gun tattoo — the most notorious of many inkings. To some commentators it was a “sick” celebration of gun violence. But to him, the gun is a reminder of his father’s murder when Sterling was two, a reminder that the only shooting he will ever do is with his feet. He has no memory of his father, knows little about the circumstances of his death, just that he was gunned down in an argument in Jamaica. Had it not happened, the chances are Sterling and his family would have stayed there. His mother came to London to find work; the children followed. He sums up his first impression of Britain, aged five, in one word: “Cold.” From sunny Kingston to the St Raphael’s estate in Neasden, near Wembley Stadium.

He says his five closest friends are from those days. On Wembley match days with England or City, he says it sometimes feels unreal because of all the reminders of his childhood they pass. It is a multicultural area and, through his entire childhood, he says he never experienced overt racism. His first direct experience of it came as a teenager playing at Liverpool: someone he thought was a fan calling him the n-word, hitting him and getting more than he bargained for in return.

At times, he comes over as younger than 24, at other times a lot older, wiser. I wince when he says he has “no interest in politics”, not because I think he should, but because the debate he generated has taken him into a political space whether he likes it or not.

He has an endearing ability to give a straight answer, while also managing to spot pitfalls. So, when I ask if Manchester City could beat England, he recognises that a truthful answer might produce headlines neither he nor the England manager Gareth Southgate would welcome; so he says City could beat France, which, given they are world champions, is a clever way of saying they could beat England too, without saying it.

There was a time when he read criticism, and it got to him. Now he can take it or leave it. It is a different kind of mental strength he has developed to ensure he sleeps well the night before a game, and rests properly on match day. He doesn’t think about the game until the team bus gets to the stadium.

Did I learn anything new? I did. The depth of his religious faith. He kept saying he didn’t want to get into it, but get into it he did. Simple beliefs, really. God exists. Paradise is here on earth. And we are all responsible for the choices we make, good or bad.

When I got home and the family asked me what he was like, the adjectives that came to mind were far removed from those I was used to reading before “that post”. Calm, for example. Composed. Serene, even. Perhaps it is as much about his faith as his football. Certainly, as the debate he sparked on race has shown, there is much more to Raheem Sterling than the game that has made him famous and wealthy, and plenty more to come, on the field and off it.

Oh, and he delivered a lovely little message to Elizabeth, who said both her street cred and her positive mindset for her exams were enhanced as a result.
You must log in or register to reply here.
Unread Posts
Share:
Facebook Twitter Reddit WhatsApp Email Link