nyCITY said:
You mean real world like when the entirety of English sides was banned from continental competition for an indeterminate period before being allowed back 5 years later? All because of the actions of one clubs fans, not even the owners or club itself. The footballing world will be fine if owners walk away and clubs go into administration.
Click to expand...

A totally different situation, and time. What you are talking about now is a punitive punishment on private individuals,and enforcing it by threatening to punish the clubs if those individuals don’t pay up. For breaking rules which at at best are debatable and which concern the clubs not the individual owners and for which no fine / punishment is prescibed. You honestly think that is either remotely possible, or wouldn’t end in the courts?
Your punishments just way over the top vindictive and impossible.The owners will not face any punishment and it’s extremely unlikely any club will be punished either,certailnly not the ones that withdrew.
P

Plays By Sense Of Smell

nyCITY said:
Why can’t they just go into administration? Aside from us,Chelsea and Milan (which was taken over by Elliot after the prior Chinese owner defaulted on its debt), all of the other clubs in the SL decided to spend as if they were going to continue to grow and have access to cheap capital. That is their fault. The system needs fixed because these clubs are allowed to continue to operate unviable long-term enterprises at the the expense of other clubs. Their shortsighted need to win comes with a cost and that cost is loads of debt and potential administration.
Click to expand... 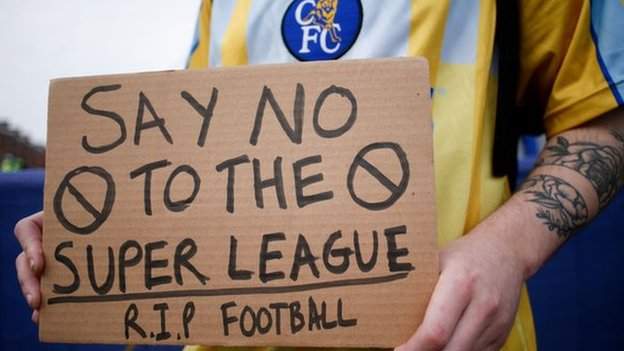 The Premier League is to bring in a new owners' charter to stop future attempts to form a breakaway Super League.

The Premier League is to bring in a new owners' charter to stop future attempts to form a breakaway Super League.

"The actions of a few clubs cannot be allowed to create such division and disruption," the Premier League said.

"We are determined to establish the truth of what happened and hold those clubs accountable for their decisions and actions."


Will the suits remind us how the Premier League came about?

Where was the accountability when the "Big 5" told the Football League where to to go when they were forming a Super league?

the major football broadcasters are fuelling the fire over the super league because of the fear in losing the tv rights
they have drummed up a fan revolution to put a stop to it. even pundits are drilled before the game to make as much noise as they can

sky and BT-sports are running scared of the internet companies that want to invest in football
most people in the world have internet at home or on the phone and if they ever got hold of football it would be like printing there own money ? Amazon or Disney would blow sky out of the water if they was allowed to bid for the rights

but sky and its premier league will be just about safe this time around because of clubs hands are tided
if they get the new law about clubs leaving gets voted in then nobody can leave and sky will be home and dry
everybody been fooled into thinking all the tv rights slots are up for sale and bidding has been invited ? but the truth is skysports slots are solid and and water tight and not on the table

sky would have been blown out of the water because the internet companies can offer much lower subscription fees each month and still make football clubs £billions. £7.99 a month or £80 a month its simple maths

Gaudion M said:
R Madrid and Barcelona are financially feked. I've been saying it in the various transfer threads for months. They needed this money.
Click to expand...

The regulations required to prevent another attempt at establishing a closed competition beyond the control of the traditional governing bodies are fairly obvious but it is also obvious that the Spanish clubs and three of the English clubs received enormous encouragement from UEFA's craven cooperation in introducing regulations designed to set these clubs position at the top of football's pyramid. Agnelli was complicit as well. FFP was introduced for exactly this purpose and took the outrageous step of putting severe limits on owner investment while abandoning any attempt to deal with debt. The clubs behind the ESL are the most heavily indebted in European football. UEFA could restore trust in itself and take the greatest step to winning back the confidence of fans by allowing unlimited investment while penalising owners who do not deal with debt. Limit spending by debtors not investors. Yes, I'm a City fan and this would make life considerably easier for City, but I'm not going to apologise for that because if we want to encourage more owners to be like ours we have to slant the rules to this end and not to protecting the Glazers and others.
F

Searched for the 50+1 thread but couldn't find it. A couple of weeks old but worth a view for anyone who hasn't seen it or isn't that clued up on how the rules work.

What a shocker, eh?
L