BlueMoonRisin' said:
Just come off the Wye after a few hours. 6 barbel between 5-7.10lb and a nice 4lb chub. Had to accurately cast 35m between two far bank bushes which I did but I ended up losing 5 feeders in snags and streamer weed. Not a bad days fishing.

Tomorrow we're going canoeing from Ross to Symonds Yat. Heard it's worth doing so looking forward to it.
Click to expand...

Well done. Good result. I’ve fancied the canoeing before too.
B

Didsbury Dave said:
Just back home after a grim 24 hours on the Tidal Trent. It rained all night so I had to hole up in my bivvy. Not a single touch on either rod. Baits, despite being air dried boilie on one rod, continually removed by Mitten Crabs I assume. Everything’s covered in mud but I will be back to this spot.
Click to expand...

I wouldn't be surprised if those mitten crabs are actually signal crayfish mate. I have a couple of crayfish traps. They make a good curry.
B

We enjoyed the canoeing, really nice scenery and bargain at £55. River is up 18" and pulling through. It saw 6 anglers in 15 miles. Some superb looking swims, most overgrown unfortunately.if I was local I'd have a few swims cut out.
S

Another poster dead to me. :)
P

Location
out of my tiny little mind

Newman Noggs said:
Been out a couple of times over the last few days. First time to a Leamington Anglers reservoir where I set up a carp rod as well as my little fish float rod and surprised myself by catching an 8lbs 6oz grass carp, a new species for me and, by default therefore, a personal best. My chips were well and truly pissed on when the bailiff came round though;

Bailiff - Didn't know there were any that small in here !I

Next stop was the Shropshire Union where we caught lots of fish but nothing over half a pound and most around 3 or 4 ounces. However, I caught one fish we had no idea what it was. A fish\dace type thing with outsized, low-set eyes. After circulating a picture, one of the lads recognised it as a nase. Another first and personal best (2 ounces).

I'm thinking of setting up a specialist group for anyone who has now caught a vendace, grass-carp and nase.
Click to expand...

Just on my way to Ross and will fish there providing a couple of pegs I fancy are free. If not a short drive to Kerne bridge. Not fished there before but it's day ticket and has some good looking pegs I saw whilst canoeing. Dried my gear out now and tied some new rigs up. River is fining off nicely and I'm feeling lucky.
B 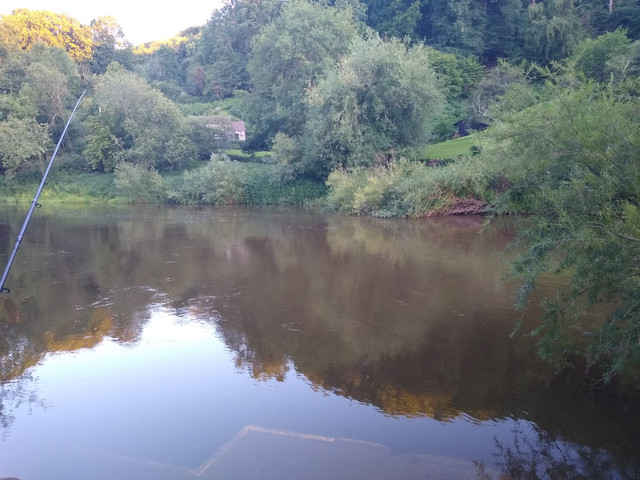 I took a trip to The Ribble this evening. River was dining down after flood and really pushing through. The weather was bright. I had five hours to get my barbel season up and running. Just before I packed away the downstream rod screamed off. A had an enormous tussle with a fish in the floodwater and could tell it was a good one. Turned out to be 9lb 10oz, so a pleasing fish to get off the mark with. If I could have stayed I’m sure I’d have had more.
N

Think I've fished the other side there. Is it called "Thomas Wood" do you know ?
B

Newman Noggs said:
Think I've fished the other side there. Is it called "Thomas Wood" do you know ?
Click to expand...