PS Liverpool.com is the Echo by another name, owned by Reach PLC.
I think they cynically bought that domain hoping the club would offer them a huge purchase settlement.
They didn’t.
The term was “cyber squatting”
So Reach PLC were stuck with the domain and instead used it as a fanzine site, posting loony cult propaganda that even the Echo Chamber main site might consider extreme.
It is the very epitome of clickbait for absolute fucking lunatics and the mentally ill.
And yet they all sit next to each other in the same room
L

jrb said:
This is why this thread is great and important. Apart from positive City articles, which let's be honest are few and far between, it allows us to highlight the stupidity of the Scouse (and Rag) infested media and social media. If you want to watch the video Google it. No link. 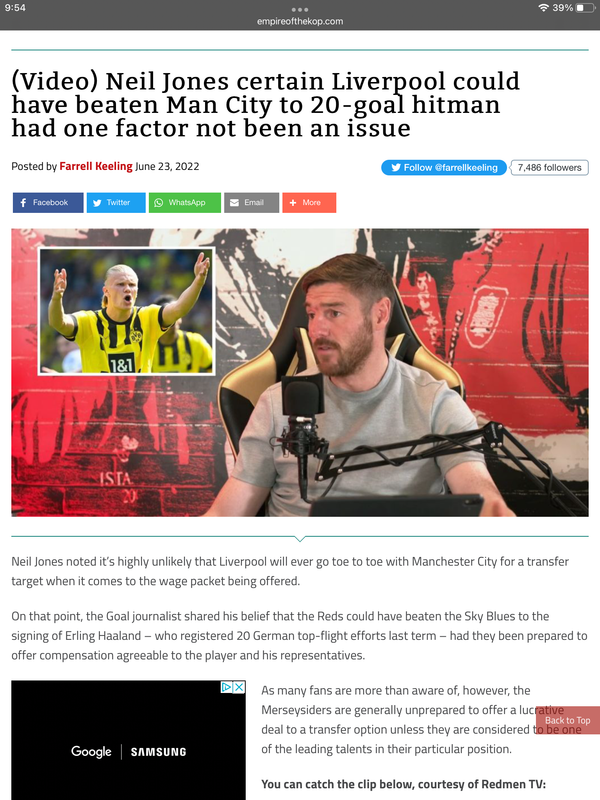 A deluded div and Cult stenographer. A smacked arse baby.
If he had any balls he should be asking where all their money goes, instead of crying about City
C

Not thinking of a certain 5live tea time presenter there by any chance?
H

crazyg said:
Is an algorithm a dyslexic logarithm?
Click to expand...

I know an aldorithm is the noise you can hear in your head when you imagine yourself punching John Aldridge repeatedly.
B

Team supported
The Only Football to come from Manchester or anywhere

the blue panther said:
Vrrvrry you didn't get done for child abuse.
Click to expand...

I know. He became 3 a few weeks after Italia 90 but he was hooked by then. He used used to jump for joy whenever he heard "Nessum Dorma' but it became popular generally and he was wondering why no football was on when the music was on.
He can honestly say he was at York away
T

Location
Waiting for Axelrod to return...

LongsightM13 said:
Indeed. I used to work in that industry and like the majority, went in with the best intentions.
However, come the turn of the century, I saw first hand how the change to an advertising click-based model has contributed to a race to the bottom. So much so that Civic public interest journalism has to be subsidised by the like of the BBC and Facebook by Government decree.
I never was a dedicated sports reporter but it was a real eye opener watching them operate, especially seeing how in thrall Trinity Mirror, now Reach PLC, were in thrall to the cult and united. Live blogging a fucking steel beam being moved by a crane when they were building a fucking stand
Click to expand...

I can tell you it hasn't got any easier!!

Speaking to desk heads now who don't even know what a copytaker is :(
T

Location
Waiting for Axelrod to return...

Appreciate that mate, the best of times ;)

Location
Front of the kippax chomping on a wagon wheel

petrusha said:
You've posted opinions to this effect before and I've agreed wholeheartedly, as I do again now. One might expect, if they had anything about them, that the members of the WhatsApp group would seriosly question themselves in the light of their CAS debacle, but instead they've doubled down with the addition of extra rancour and resentment.

What makes me laugh is their arrogance, thinking that they're cleverer than their readers. In percentage terms, they probably have academic credentials that surpass the large majority of their audience - but certainly not all. Someone like Stefan from the 9320 pod puts them to shame in terms of a capacity for analytical thinking. Delaney in particular should be refusing to venture out in public these days without a bag over his head such should be his shame at his reaction to Stefan's article that prefigured the CAS ruling.

I, on the other hand, take pride in the response of educated and knowledgeable City fans to the UEFA ban and subsequent CAS appeal ruling. It showed once and for all which side knew their stuff and which was comprised of a set of intellectually compromised, know-nothing, gaslighting cunts.
Click to expand...

keep saying it, Uefa got shown to be the incompetent corrupt football administration by City and not a single person in the media came out to highlight this. Then some ticketless scousers rock up at a champions league final and get roughed up by the French police, all of a sudden the entire world wants Uefa being trialed at The Hague and burnt at the stake.
F

So Liverpool won the 'research commissioned from the Times' league. Fucking hell City, up your game next season please
P

Dirty Harry said:
Not sure how much I can be bothered with this thread this year, so fuckin boring with the same old shite from the same old publications, and tbh, if the club can’t be bothered pulling them up on certain things then don’t see why I should be bothered either.
Click to expand...

For those who get upset and angered by it, I don’t know why they bother. Liverpool and United will always be the media darlings and we will never be so it will never change. Nothing we ever say or do will ever change that. We will always be Manchester City the Sheikh will always be an Emirati. Even if the Sheikh sold his stake in the club, City will still be the threat to the Cartel so the anti-City agenda would never end.

By clicking on their articles, posting them on here, linking videos and advertising their shit, our support is actively promoting and adding revenue to their anti-City bollocks.

I personally don’t get upset or angered by it. I don’t want to be liked or accepted by the Cartel and their media or the Yanks. I want City to be an anti-mainstream sub-culture club. Every win and every trophy is that bit sweeter knowing all the people who hate us will be squirming with hate that we’ve won again.

The day I stopped caring was when Buzzer was on Super Sunday for the Manchester derby when he said,


What that video doesn’t show was Dwight Yorke and the presenter laughing at him after he said that… and to top it off, Buzzer has never been invited back on by Sky since. Yet Yorke’s laughter was shown up a year later with the 1-6 and from that moment on, that shut the door on the media for me.